In nearly every larger town and city  in Finland there is a Lutheran State Church. Somewhere nearby there will be the parsonage. Pappi is the word for minister or pastor and pappila is the parsonage. Vanha means old. These parsonages are not in their current use and have been sold many years ago to private owners. Some of these beauties have been renovated and others are waiting their turn. But once upon a time there was a time of large old manors that also owned large areas of land. The pappila was usually one of the larger manors in the county. They would have hired hands that would live on the land. A male hired hand is called a renki and the female is called a piika. The yard near the main house often formed an open square with housing quarters for the hired hands along one side and a barn and storage sheds along the other side. The town or county pastor was a revered man and could be considered a part of the upper class. In a time before general voting rights the upper classes and pastors had the right to vote.

A few days ago we returned back home from a family trip across Finland. We visited one of our friends that now live in a newer house that is situated next to the vanha pappila built around 1850. As we toured the old house and the quarters of the hired hands we spoke of days gone by. It was not completely impossible for someone born as a renki to move up in society if they for example married the widow of the house. Movement in society was much more difficult than today. What would life have been like? Touring these old buildings it brought back thoughts from the famous Finnish novel, Under the North Star (Täällä Pohjantähden alla) by Väinö Linna. It is a trilogy that tells the story of Finland as it goes through the civil war and gains independence. The father of the main character is a crofter. There is a fierce discussion of the Finnish language in the novel as it has a significant role in the creation of Finnish national identity. The book tells in a very engaging manner the emergence of social movement and the creation of a new type of society and helped me understand some of the political positions that people hold yet still today.  I sincerely recommend the book and as it tells the story from one perspective and once started is difficult to put down.

I suppose the way life unfolds depends quite a bit on the people around you and the family you are born into, but I suppose that is still true to this day. If you were born to a hired hand, your quality of life depended on how fairly you were treated by your superiors. Usually these hired hands had a one year contract with their employers. Then they could in theory move on to try their fortune somewhere else. Many things look good on paper and in theory but when human nature is entered into the picture and the politics that goes with it, even simple things become complicated. On the same land there might have also been renters of the land that would also work a set amount of days for the owner of the land. These crofters were called torppareita. The crofters did have the opportunity to gain a bit of income on their own and were not as dependent of the land owners as the hired hands. Land ownership was quite significant as it meant the right to vote. Finland was one of the first countries to grant equal voting rights to men and women.

In the rooms of the manor are layers of old wall-paper decorated with decorative roses. In some rooms the strong timber logs are bare. Along the back of the house is a large veranda that was used for entertaining. I can almost imagine the ladies sitting in the shade, sipping their tea and looking out at the peony patch and the lake that is just down the hill.

The floors in the house are a bit uneven now, as is the back veranda. This is due to the frost heave and lack of ground frost insulation that is commonly used in construction today in cold climates. Attached to the left side of the main building  next to the kitchen is a pantry. In the hired hands quarters is a large wood burning oven that takes up a one whole corner in the room. It doubled as the bakery for the manor and in the winter provided heat for the hired hands quarters. Similar ovens can be found quite commonly in homes throughout Finland.

My friend Sinikka served the most delicious strawberry tart after our tour. I couldn’t help myself and a second slice found its way onto my plate.

Beat the softened butter and sugar together with an electric mixer until it is light and fluffy. Add in the egg and beat well. Mix the dry ingredients and fold into the batter. Pat into a parchment paper lined tart tin. Purée the strawberries and mix in the tablespoon of corn or potato starch plus sugar to taste. Bake in the oven at 200 C/390 F for about 30 minutes. Gluten-free tarts tend remain raw in the middle easily. The parchment paper allows you to easily lift it up slightly from the side to check if it is done. After removing from the oven, sprinkle with sugar. This will prevent the strawberry purée from forming a skin. 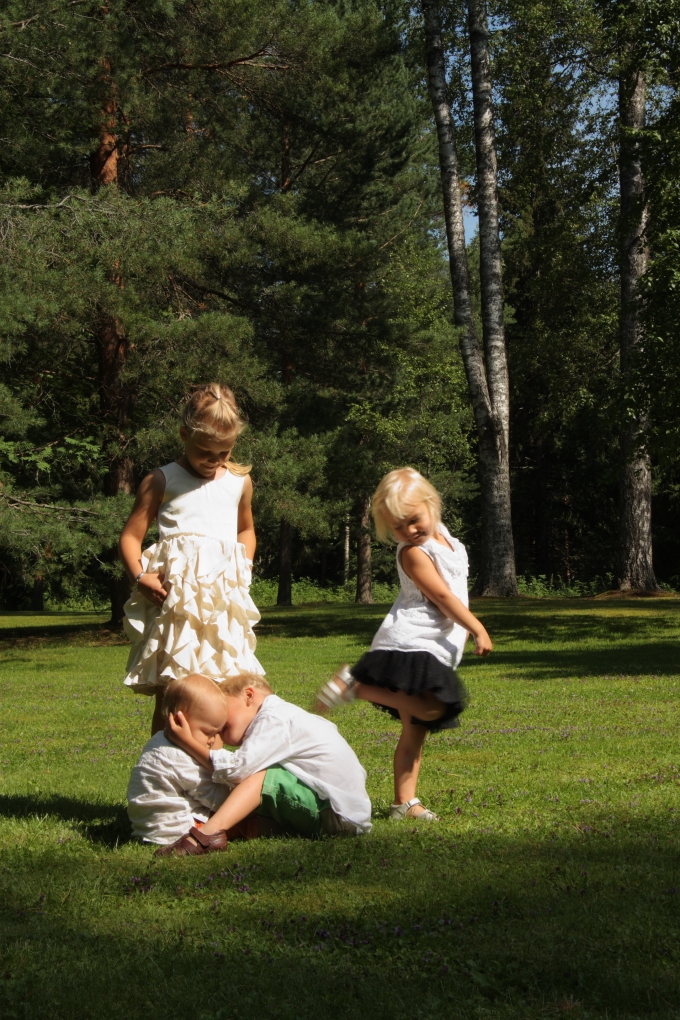