Finland is full of Christmas parties or as they call them, pikkujoulu. Our children love organizing a pikkujoulu and last night we had a houseful of thirteen year-olds. Watching your own children grow up often brings me back to when I was the same age. There is something a bit beautiful and at the same time a bit awkward about being thirteen. They are trying so hard to be grown-up and at the same time they aren’t quite there yet. Privilege and responsibility go hand in hand and it is a steep learning curve for the parents to find the fine balance between the two. I notice that it is easy to expect responsibility and at the same time I need to learn to let go and give the opportunity for a little freedom. They don’t learn without practice. How were your teenage years? I remember that the spoken opinions and just as importantly the non-verbal opinions made by my friends were very important. I was very much a goody-goody-two-shoes, which I am sure, annoyed some, and in general wanted to please everyone and never wanted anyone mad at me. While I still am that way deep down, I would like to believe that I have learned that not everyone can be pleased and unfortunately you can’t be everyones’ best friend.

I remember going to the mall with my friends when we were about twelve or thirteen. It was right before Easter. We spent a good amount of time discussing if we were too old to take our picture with the Easter Bunny. Someone might think that we actually still believed in the Easter Bunny and…Gasp! That would have been disastrous! In the end we decided that we could take our photo with the Bunny and I have a copy of it in my album as a keepsake. So glad we dared!

The evening was fun and even our little ones joined the games. At first our Erik was complaining why the whole house was full of girls and no boys but he was satisfied after he was able to have first dibs at the table. Later when they played a game where one had to keep a straight face, he told me “Easy, I can do it no problem” and so I told him to go join. He is used to girls and so he had no qualms joining in and pretty soon everyone else was laughing but him. I had a hard time keeping a straight face as well. 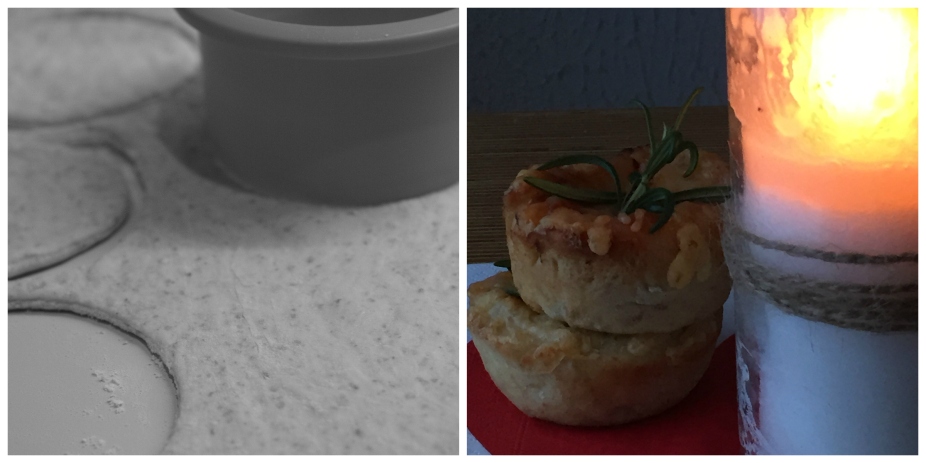 These pizzas-in-a-tin work great with the younger crowd but you could serve them just as well to youthful adults. I thought they were pretty good if I may say so myself and at the party they disappeared quickly. The dough is soft due to the mashed potato flakes.

Grated cheese (I used a mix of mozzarella and emmental) 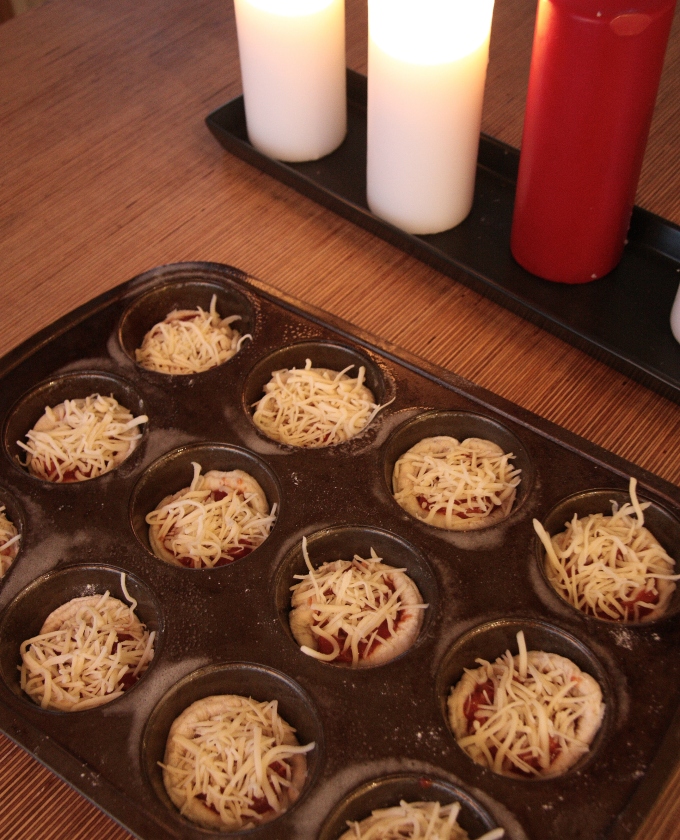 Pour the warm water into a large bowl and add the yeast and brown sugar to it. Allow it activate for a few minutes. I usually use frozen fresh yeast and I just put the frozen block into the warm water and wait for it to thaw out (about 5 minutes). I use the dough hook with my kitchen aid but you could knead the dough by hand just as easily. Next add the salt, potato flakes, rye flour and half of the flour. Knead the dough for a few minutes. Add more flour and continue kneading. I never add all of the flour at once. If the flour is drier it will absorb more liquid than if it contains more moisture. The dough will be slightly sticky but still workable. As the dough is forming elasticity add in the oil. As I was in a pinch for time I did not allow it to rise, rather I rolled it out immediately and cut circles out with a cutter. I let them rise once in the tin.

I made the sauce while the kitchen aid kneaded my dough, but if you may let the dough to rise while making your sauce. Fry the bacon and chopped onion on medium heat until cooked but not crisp. Add the sauce, crushed tomatoes and seasoning. Allow to simmer on low so that some of the liquid has evaporated and it has slightly condensed. Remove from heat.

Spray muffin tins (I had three on hand) with non-stick spray and place the circle of dough on the bottom. Next spoon one tablespoon of sauce in each muffin tin and a sprinkle of grated cheese. Bake at 175 C/350 F for about 8-10 minutes or so that the bottom of the mini pizza has slight color.