There are eighteen days until Christmas if you ask the Finnish kids and if you ask the American kids there are still nineteen days. Today in the kids’ entryway where the calendar is on the wall, there was a little spat between two of the girls. One claimed that there are eighteen days and the other nineteen days. Both were right, it just depends how one counts the days. 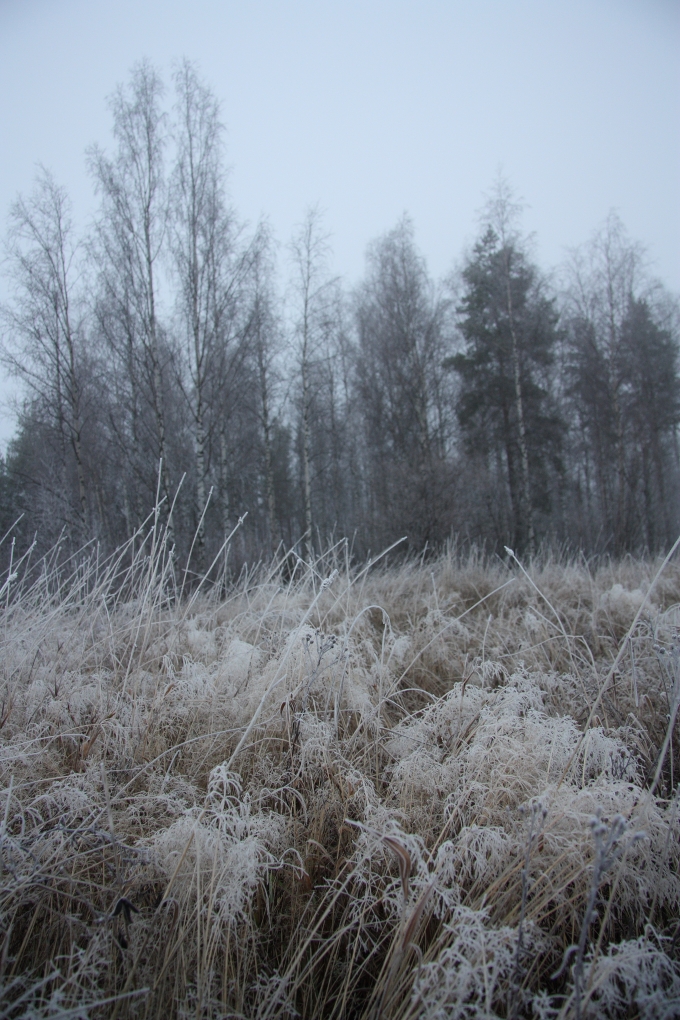 Yesterday the field was tousled like a messy mop of blond hair. Today in the morning it was covered with a heavy layer of wet snow. It was cold enough that it made everything look white. This is what our children have been waiting for. When it is dark before four in the afternoon they often come and complain that there is nothing to do. Perhaps it was the lack of fresh air that instigated the spat in the entryway. It all changes with a little snow and head lamps. They can easily be outside for hours and come inside with rosy cheeks and in much better spirits. I’m keeping my fingers crossed the snow stays. 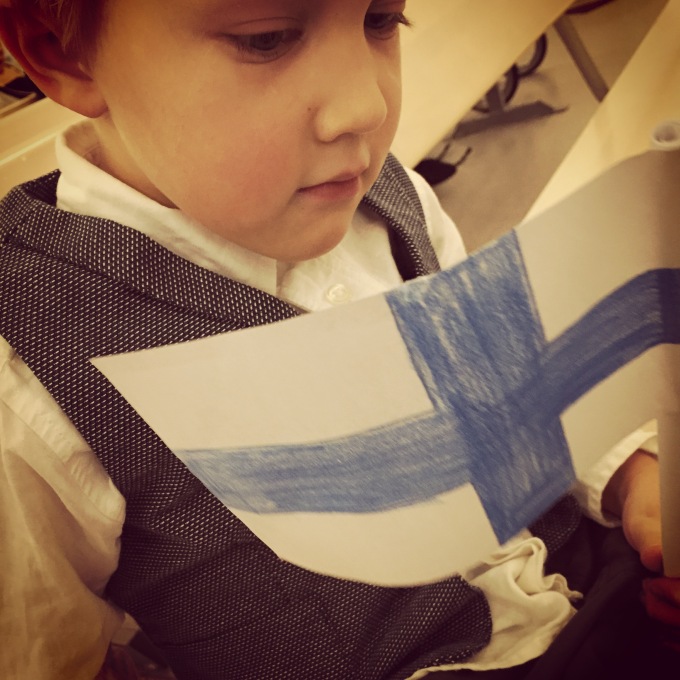 Today is the 97th independence day of Finland. Peace arrived in the mid of winter. Last night at our literature club we discussed the well-known novel, The Unknown Soldier (Tuntematon Sotilas) by Väinö Linna. I received a copy of the English translation of the book at the young age of eighteen from my honey. Now after living here in Finland for almost fifteen years I am glad to be reading it again. I have come to learn how society has been shaped by it’s history. The book tells the experience of war in a rather truthful unglorified manner. All of the stress, fear and feelings can be sensed. My almost six year old in the picture above has been asking me recently why we have wars. One day we were discussing the Ukranian situation with kids, when my eight year old asked me why Russia needs to be so greedy. Difficult questions to answer. I understand the need for the armed forces as their primary task is to protect and defend and in all truth, soldiers are probably the last ones to actually want a war. Always in wars someones gets hurt and families become split and it is a sure test of the human spirit. Below are two links to the Finnish song, “Veteran’s Evening Call”. The first is accompanied by a slideshow of photos from the Finnish wars. The second youtube link is of the same song, but is sung by a compilation of men’s choirs of which many of them are eldery and there are many war veterans standing in the front rows. Almost all of the rest standing behind the veterans are children of veterans. Jorma Hynninen is the solist and their powerful memories of the war is transmitted to younger generations. They are passing down history in the age-old tradition of singing. I think the performance is very powerful.

Traditionally on the Finnish independence day two candles are placed at the windows. The exact origin of the tradition is not known but according to wikipedia, the burning of two candles was used on the February 2nd to commemorate the Finnish poet Runeberg as an action against Russification. The two candles in the window was also used in 1915-1918 to designate safe-houses when Finnish jaeger soldiers secretly made their way from Finland in to Sweden and continued their way into Germany to receive training. It seems as if the two candles in the window are a symbol of independence.

In my previous post I promised a recipe for a gluten-free no-bake pumpkin cake in just a few days. It has been more than a few days now but I promise that I have not been sitting lazily on the sofa. In fact it has been quite exciting. I have been creating a new blog that I will be writing in Finnish called, Jenkki mutsi maalla. Jenkki in Finnish is a slang term for American and it probably derives from the word Yankee. Mutsi is slang for mom and maalla means countryside. In other words the name means, Yankee Mom in the Country. I will be working with Kluuvikadun Coffee Roastery and Leipomo J. Martin which is a bakery. I will definitely continue tableofcolors and the intention is that they will not be copies of each other. They may occasionally have the same recipes and perhaps sometimes even the same story but they will live lives of their own. 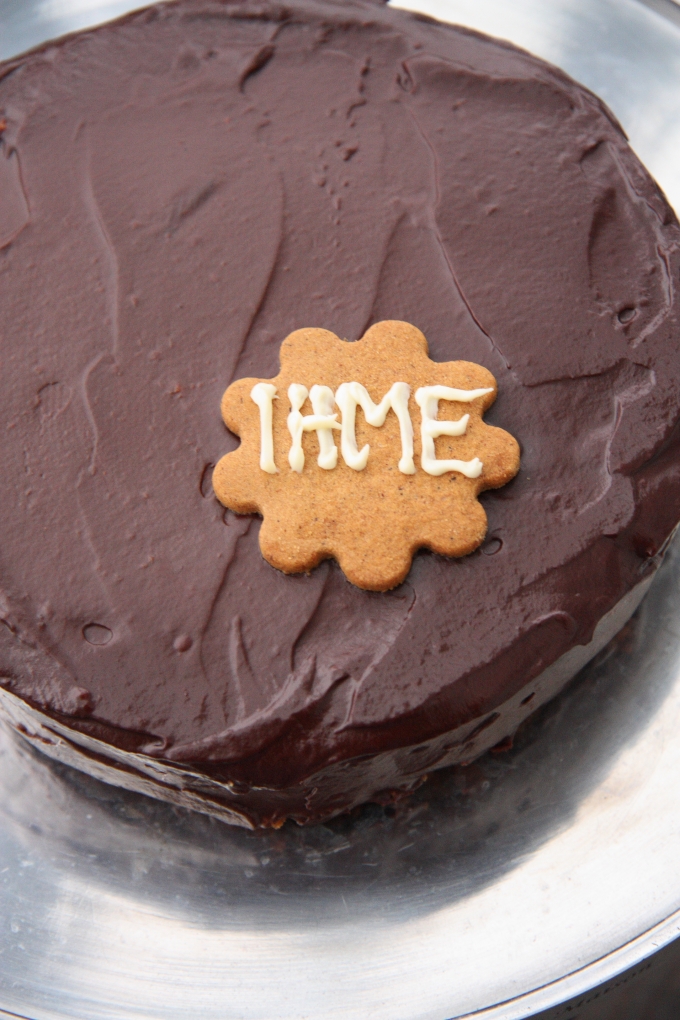 This cake was originally made for the reception of my friend, Kaisa Peni and the debut of her Christmas recording, Ihme. In my previous post is a sample of her singing. If you click on her name it will bring you to her website. For the English version click on the English tag on her website. It could make the perfect Christmas present for someone special that enjoys peaceful music.

Place the gelatin leaves into a bowl with cool water. Allow to soak for about 10 minutes. Make the filling meanwhile.

For the filling whip the cream and then add the quark. Next fold in the pumpkin purée, sugars, the other half of crushed cookies, cinnamon, cloves and ginger. Next boil the water. Remove the gelatin leaves from the cool water bath and gently squeeze excess water away. Place in a small cup. Pour the boiling water over the gelatin leaves and mix until melted. Pour in a stream into the cream and quark mixture mixing continuously until incorporated. Pour the mixture into the springform and cover with cling film and place into the refrigerator or freezer for a quicker set. Allow to set in the refrigerator for about four hours or in the freezer for an hour.

Bring the cream to boil in the microwave. Add the roughly chopped dark chocolate to the hot cream and stir until smooth. Remove the springform place cake on a rack. Pour the ganache over the cake. Garnish with a gluten-free cookie or two. Enjoy!