It was a relaxed whirlwind of a trip, if a whirlwind could be considered relaxed. So many new and old experiences re-experienced. Yet the pace was not hectic. Sometimes the moments best remembered are ones that are hardest to record. A hug or the feeling that your heart might burst when you see loved ones after such a long time or the bitterweet feeling of leaving them once again; Wishing that the distance was only a car-ride away. It really was a wonderful trip full of emotions in addition to the experiences. Really, I can’t just sum it all up in one post, and so I have decided to string bits and pieces of Detroit and Minneapolis into my posts during the next few weeks and months.

Visiting Detroit was a first for me. My sister showed me the different faces of the city. In three and a half days we covered more ground than I could have ever done with just a city guide and my baby for company. The thing is, she has lived in the city for about eight years. First she studied to become an architect and now she is living her dream and is part of the effort of rebuilding the bankrupt city. It might sound romantic on paper but in real life it is anything but romantic. It is an effort that requires for the sleeves to be rolled up as your hands will get literally dirty.

As the city is bankrupt there is no sponsorship available from that direction and so it requires the time and effort of private citizens and the resources of private donations to clean-up and rebuild parks, trim and plant trees or acquire abandoned buildings to create spaces for business, community or homes. Some of the abandoned buildings are owned by millionaires playing the waiting game and for years they are empty. As is the case with the Michigan Central Train Station and Book Tower below. Efforts as large as these always involve some politics and differing interests but what I do think this whole effort brings at the grass-roots level is the sense of community. I often heard locals say, Detroit has a bad rap but they love it there. There is an energetic vibe in the city.

We explored and saw some beautiful homes and just a few streets aways and sometimes even next door were some homes that the scrappers had gorged, extracting anything of value. The windows were broken and and everything of value removed: water pipes, porclein sinks, siding, hot water heaters and furnaces. Anything that could be sold for money was gone. 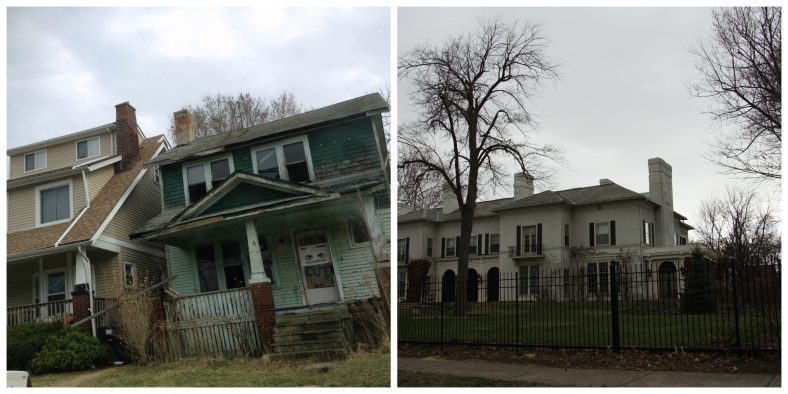 And so after our long flight across the Atlantic we had  a bit of jet-lag as the time difference between Finland and Detroit is seven hours. The first two mornings my Hugo and I were up at around five or six o’clock. After trying to slumber for a bit a longer we eventually would get up and find our way to the kitchen for some breakfast.

One evening in the upper floor of an old house in the historic district of Corktown, we made an apple-date-pistachio crumble and the next morning it was a perfect companion with Greek yoghurt as it was sweetened with maple syrup instead of sugar and was not overly sweet in any way.

Apple crumble with dates and pistachios

to be served with ice cream or Greek yoghurt

Grease the pan. We used a loaf pan and a popover tin of six. Chop the apples, dates and pistachios. If preferred the skins of the apples may be left on. Mix the apples and dates together along with half of the cinnamon, cardamom, lemon juice and maple syrup and set aside. Melt the butter and mix with the rolled oats, almond flour, pistachios, maple syrup and the rest of the cinnamon. Spoon the apple mixture in the pans and tins and cover with the oat crumble. Bake at 175 C/350 F for about an 30-40 minutes so that the apples have softened. Remove from the oven an allow to cool so that the crumble is warm. Serve with ice cream or Greek yoghurt.