Perhaps if my life had taken different turns, I might have become an urbanist. I definitely could imagine it, as I’ve spent my childhood in a city and have always loved the atmosphere of a large city. Everything does not need to be too polished as often the oldest of structures has a story to tell and it can be seen on their door frames and floor boards. Even the wall might be rough to the touch with many layers of wallpaper and paint as remodelers of various levels of skill have attempted to make a space their home. And there is something fascinating about the people in cities. Everyone with their own stories to tell just as the buildings do, all living in a relatively small area of land close together sharing life yet living individually. One thing that I noticed in Detroit was the urban gardens. It is an idea that actually originated in Detroit and has been brought to other cities around the globe.

Don’t get me wrong, I’m really enjoying life in the middle of the fields where the wild spring and summer flowers bloom in an unorganized pattern each spring and summer, as a part of me has really come to enjoy the life in the countryside. But, I think I could really get used to stopping at Astro with its menu of interesting salads and sandwiches and coffee that has acquired a true art form.

One day we ventured on foot for about six or seven hours. We explored Corktown as well as the downtown area. According to Wikipedia, the name Corktown is the oldest historic neighborhood in Detroit and the name evolved when Irish immigrants moved into the area. Most of them were from County Cork and thus the neighborhood was called Corktown. Right at the gateway of Corktown, coming from the downtown area is the Detroit Institue of Bagels. It was started by Ben who was baking bagels from home and needed a larger space for the business. My sister Kaija, has her own architectural design studio called Laavu and the Bagel Shop is one of the significant projects she has been involved in. What I really liked was that whenever possible old things had been salvaged from the buildings and put into new use. The lights hanging above the bagel mural had a previous life in a different building and have now found a new home here. I could imagine that if I lived in the neighborhood with my kids we might ocassionally stop in for bagels when a quick lunch is needed. 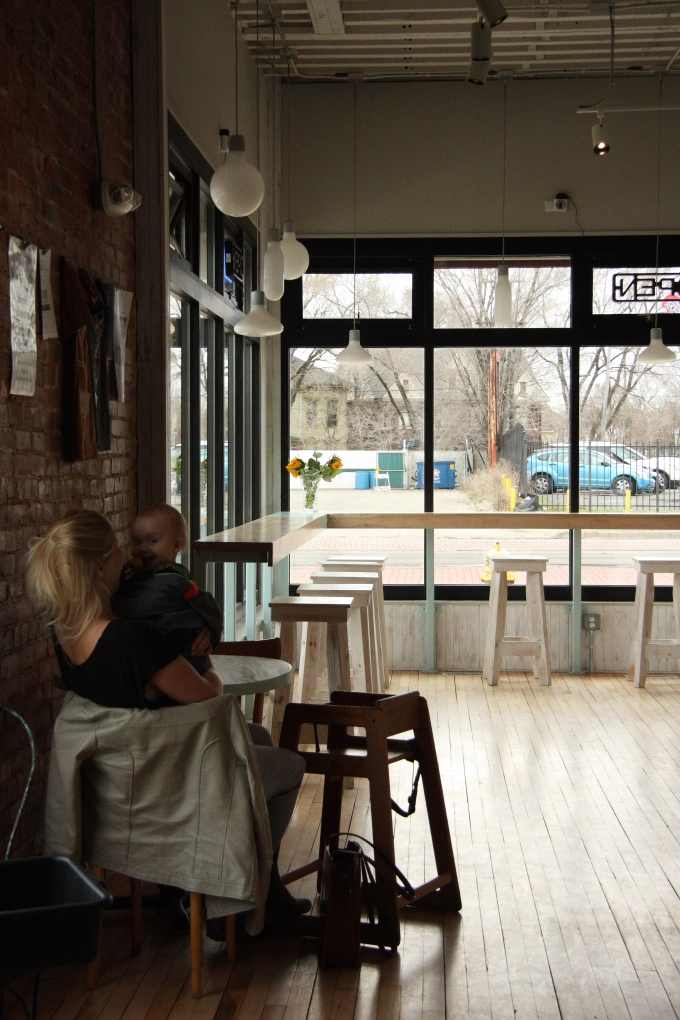 The little pocket park outside with the stools is for days when the sun is shining. The magnolia was not in bloom yet as the winter had been cold and spring had arrived a little late but I can imagine  what it would be like to sit in the park on one of the Beech seats.

After a day of walking and a ride on the monorail, Kaija made a salad that was similar in style to some of the things in Astro. And now I think I will be on the lookout for French lentils. They are the ones that keep their shape after being cooked, although you do need to be careful to not overcook. Most lentils that can be easily found here are better in soups and stews as they fall apart after being cooked. If I can’t find them from Säästä & Punnitse, I might just have to ask them to order some for me. 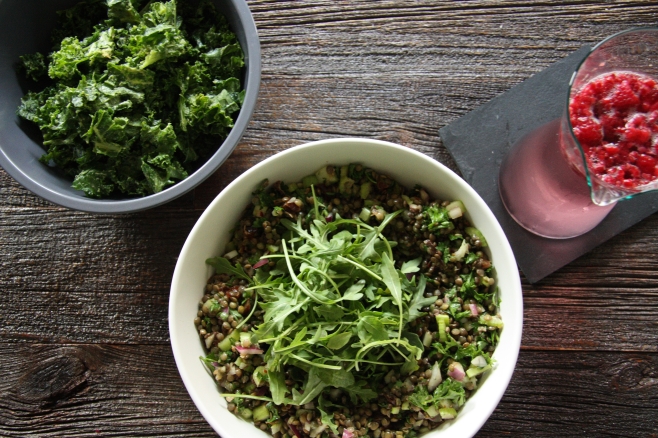 Cook the French lentils in lightly salted water and bring to a boil. Turn heat down to a simmer in a covered pot for about 12-15 minutes or until soft, but do not over cook. Rinse and set aside to cool. Finely chop red onion(add more onion depending on mood or taste), celery,capers, herbs and dates. Toss in a large mixing bowl. Add lentils when cooled.

Prepare dressing. Mix vinegar, olive oil, and seasoning according to taste. Kaija loves the combination of cumin and lentil, so she often adds more cumin and doubles the amount of crushed red pepper. It gives the salad a wonderful dimension.

This salad can be served with greens. Kaija prefers peppery arugula, but is could be served with sea salt massaged kale as well.
To use leftovers, mix about 2 cups of lentil salad with an egg and fry into small “pancakes”. Serve with roughly chopped tomatoes. Delicious.

And so, even though the last post had many pictures of abandoned homes and buildings, so many more are occupied and full of innovation.