Can’t you just feel the anticipation in the faces of the children in the photo above? It was finally the day that they had been waiting for months and a mark that spring would arrive after the darkness as the Winter Solstice, which was on December 22nd this year had been passed. I’m not sure if they had actually been called to the table yet, but they couldn’t really help themselves. Afterall, Joulupukki or Santa Claus magically knows when we have eaten our dinner, and will not arrive before that time. Little did they know, that Joulupukki was actually sitting at the table with us, eating dinner. 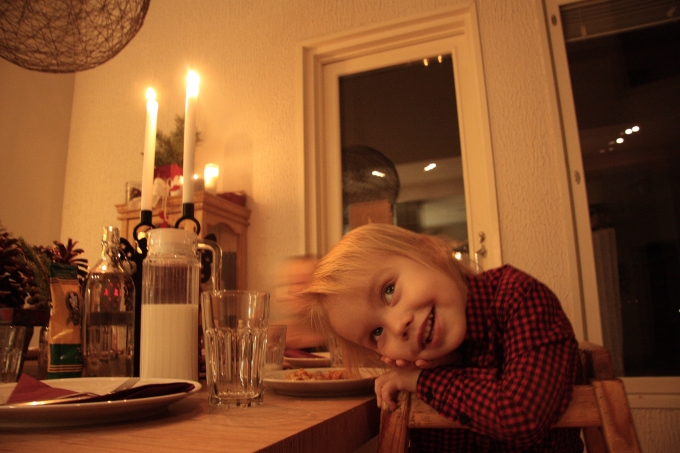 The days before Christmas are often so full of things to do that it seems to me, that the Mother’s Christmas begins after the presents are unwrapped and everyone is playing or admiring their new things. But without the waiting and the anticipation, the pleasure of Christmas or the relaxation that can be almost felt in the air, be so great.

Before Christmas I promised a recipe for rye gingerbread cookies that I tried for the first time this year. Their flavor was delicious, and the cookie was a bit softer than the traditional gingerbread and chewy. The dough is bit more tricky than the traditional version and it needed quite a bit of flour when rolling out. This year I also made a traditional batch of dough, as gingerbread cookie baking is something that the children always enjoy, and the regular version of the dough is easier for little hands to handle.

This recipe is originally from the Finnish food blog Kaikki äitini reseptit. I have changed it a bit to make it easier on the baker.

Put the molasses, sugar and spices into a pot and bring to a boil. Allow to bubble for a few minutes so that the sugar begins to melt. Remove from heat and add in the cold butter, stirring it every once in while until completely melted and combined. Add in the eggs one by one and stir until incorporated. Add the baking soda and salt to the rye flour and combine with the molasses mixture. Next add in the almond meal and finally the flour. Mix until it forms an even cookie dough. It will be very sticky at this time. Cover with cling film and refrigerate overnight.

Hoping your Christmas season was peaceful and a Happy New Year 2016!