On Sunday we drove to the cabin. In Finland everything stops in July and a pilgrimage to the cottages begins. Bureaus and offices are usually open but temporary personnel fill in and most things happen at a sleepy pace if at all. Most paperwork sits and waits until August and the return of the permanent personnel. At first I had a hard time adjusting to the idea of a nation in which everyone vacations at the same time. Vacation and free time is a significant part of the life style here. Common questions asked upon seeing an acqaintance in the summer is about vacation. Have you been on vacation yet. How long was it this year. And if it was under three weeks, you might hear condolences about how short your vacation was. But I have become used to this land of people that all down-shift at the same time and look forward to a slow-paced month where only the absolutely necessary errands are made. All other time is spent enjoying summer even if the weather has not been quite as summer-like as usual.

Finland has over 180,000 lakes. The shores of these lakes are dotted with summer cabins and cottages. Many are the traditional mummonmökki or a small grandmother’s cottage with just a room or two and often do not have running water or electricity. Cottages often have a history and you might find things that are tens of years old and full of stories to be discovered. The toilet paper holder might have be whittled out of wood at the end of the dock on a breezy day, or the matchbox holder might be a from a wood shop class in the city. In the bedroom there is a chest full of old Donald Ducks, some of them as old as your dad. The beds are covered with heavy and well-made spreads that would probably be considered vintage. Then there are the cabins that are large and contemporary and have all the conveniences of city homes. The blueprints might have been made by a well-known architect and the windows have Marimekko curtains. Both of these cabins dot the shores side by side. Some new and some old. One thing they all have in common is the sauna. The sauna is usually in it’s own small building close to the lake. When we visit the cabin, we take a sauna every evening. The sauna is the place to relax and socialize. Sometimes with a group of women we have been in the sauna for two or three hours. In the soft heat of the large sauna, the world has been made a better place and problems solved. Every once in a while we wrap ourselves in towels and sit outside or go for swim before another round of steam in the sauna.

Pappa made sailboats out of thick slabs of pine bark. One for each grandchild. Then he made little wood chips that each had a number. Each grandchild drew one chip and had a turn to choose their boat according to the number they had on the chip. The kids all went on the dock to send their boats off to America. A little while later Pappa took the rowboat and gathered each one. They were brought to the city as souvenirs of times spent at the cottage. 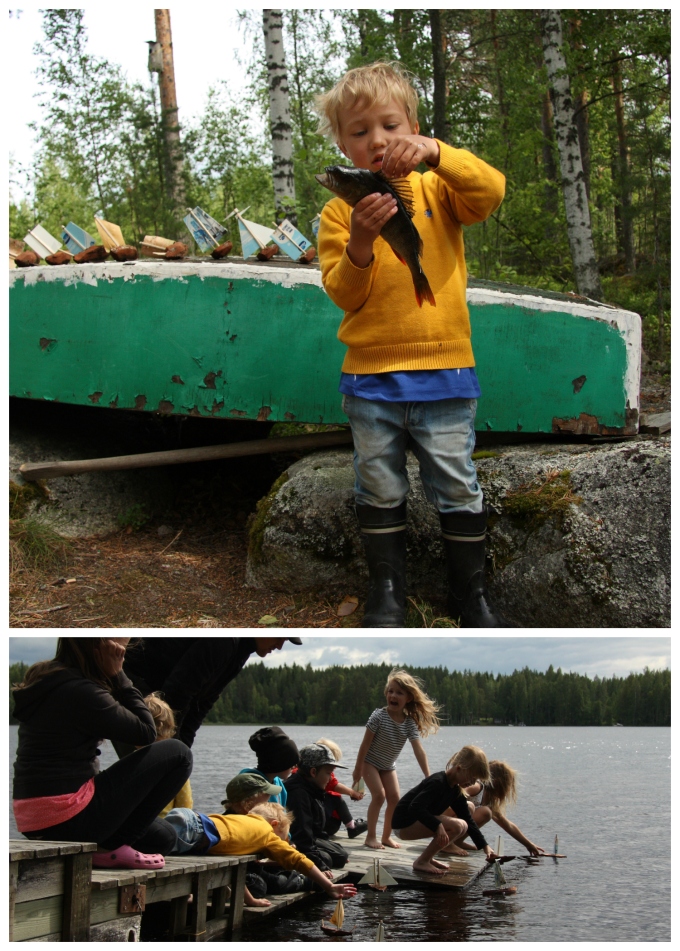 Our Erik decided that fish soup is now his favorite food. It even passed up macaroni and that is quite an accomplishment. Mummo made fish soup on one of the days while we were at the cabin. After returning home our refrigerator was completely empty except for a jar of relish, some eggs and some apricot marmelade. I ventured to the store and decided to indulge Erik and make a soup with rainbow trout. The store was full of fresh local produce. I had a hard time limiting myself. I would have liked to bring it all home.

Soup made with salmon or rainbow trout is a very traditional dish in the nordic countries. Many grow their own dill and I really think that the fresh dill is the perfect match with the fish. I tried to keep my version fairly simple, as often at the cabin the selection of seasonings might be not be as large. Many towns have little outdoor markets once or twice a week and larger cities have them daily, and so fresh produce is readily available during the summer.

Place the peeled and chopped vegetables, except for the potatoes into a heavy bottomed pot with the knob of butter and turn to medium heat. Allow to sauté until just slightly tender. Add water, potatoes, black and white pepper, mustard powder, lemon juice and salt. Allow to simmer at very low heat until the potatoes are tender. While the soup is cooking, remove the skin from the fish and any pin bones that might be remaining. Cut the fish into small bite-size cubes. 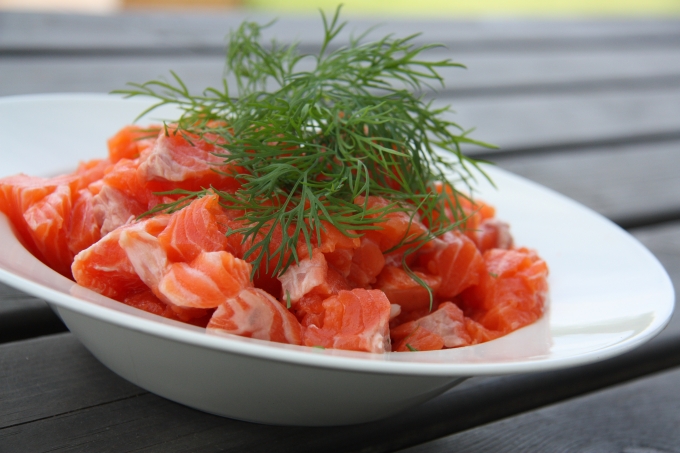 Once the potatoes are tender, add the salmon, cream, fresh dill and chives. Allow the soup to come to boil. Check the flavor and adjust salt and seasoning if needed. Serve with a dark rye bread. 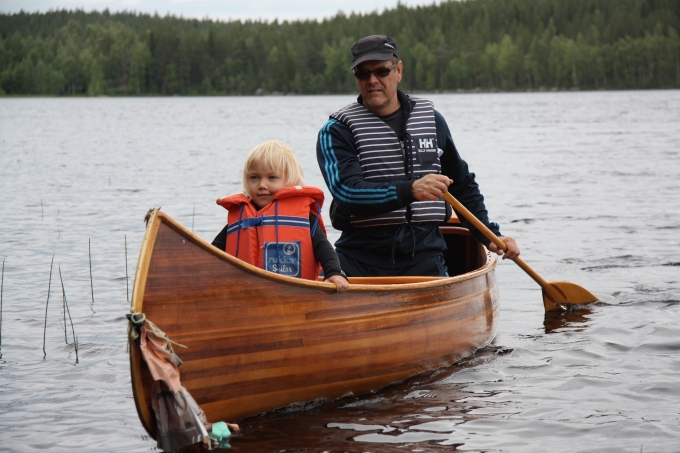