She was so excited to go try it out for the first the time. Skating was something that the big kids do and our two year-old likes to do everything they do. And maybe because she is so independent by nature, she is usually quite successful. That day it was sunny and cold and we skated for almost an hour and so did she. She did not complain once. The baby was in the buggy and ocassionally we would skate and push him around as well. Learning to skate on ice with a bit of snow coverage is a little easier, as it is not so slippery.

Some days have been sunny and some days gray during this past week, but quite often ice skating has been on the agenda. There is a skating trail made at “our” lake and another one at the Kuusaanlampi which is a nook on the Kymijoki or Kymi river. The loop is 2.5 km/1.5 miles. Four times around is a good workout and a pleasant way to start the day. There is a car track as well on the ice, but drifting the car with the hand brake is one skill I must still learn someday. Before learing that trick, I wouldn’t dare to attempt to join the ranks. It would be a first for me.

There is something about this time of year and pancakes. Maybe it is the need for a quick lunch or supper, or perhaps it is comforting after being out in the cold, but a year ago I was serving up buckwheat pancakes after our ice skating excursions. This year our go-to lunch has been banana pancakes made with almond meal or flour. They are a great way to use up the brown bananas on the counter and their ingredient list is so short and simple. I had been running across recipes for banana pancakes that used no traditional flour and the the following is my take on it. The first version has a bit more egg in proportion and the second one has less. You may choose your favorite, both work out great. 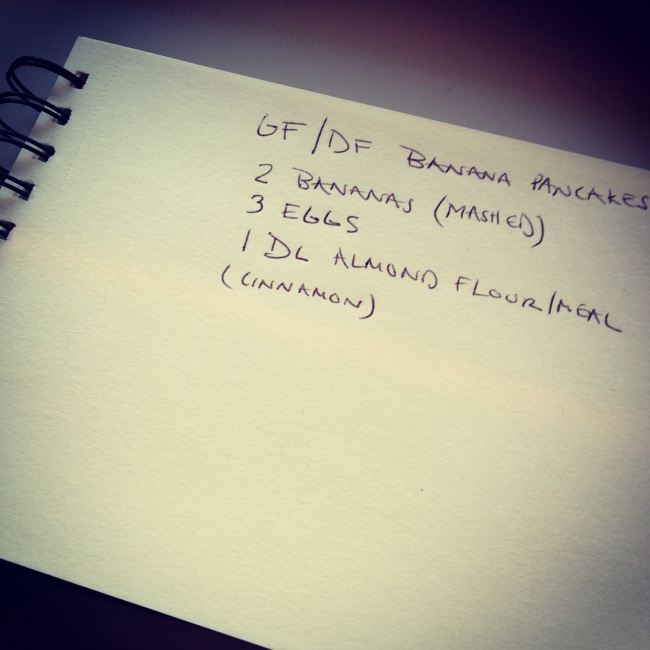 Mix all of the ingredients. Fry on a griddle over medium heat and serve with a drizzle of honey and garnish with slices of banana.

Do you remember your first time on skates? I certainly do, and I remember falling down quite a few times at first. Our little angel seemed to fall so softly and was ready to get up right after. It brought back my childhood for a moment.