A few weeks ago, right after schools were out my husband went on a trip with six other hunters. The male Common Eider or Haahka in Finnish, were migrating back to the south as the females remain in the north to take care of the young. The males leave as soon as the the ducklings have hatched. The females and their young will migrate at the end of September or in October. The Common Eider is a rather large sea duck that breeds in the Artic or northern temperate regions. So these photos are my husband’s and I suggested that perhaps next year I might come along and be their photographer. The scenery is quite beautiful and untouched. The rock islands with their round forms are shaped by the sea and the Ice Age. They protude out of the Baltic Sea. The men had the most perfect weather. Some years I have heard, it has not been so and the coast guard has been needed to escort on the way back home.

On the island is a tiny white brick cottage and a large sea marker that looks like light house. A little way aways is another small island that has another sea marker. Together, these two markers showed the way in past days for sailors, as on one side of the islands there is a deep passageway and on the other side it is rocky and shallow.

The only problem with me coming along is that the small white cottage was already at full capacity with seven gentlemen. I might have to take a tent with so that we would all fit but I promise to not bother their hunting during the days. 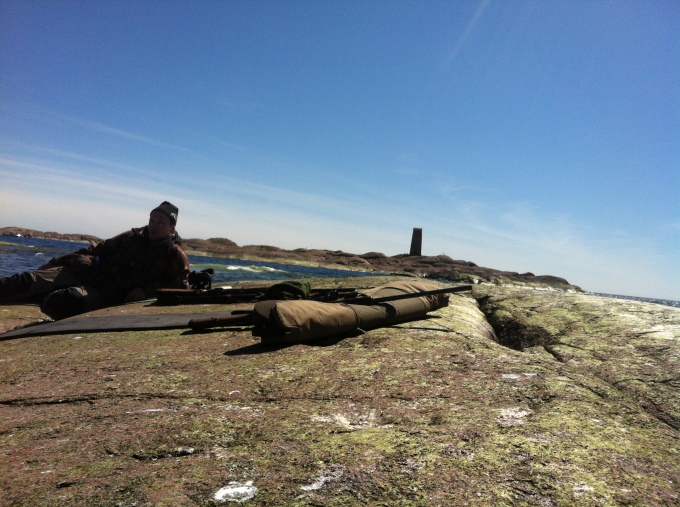 On their trip the men made soup using the Common Eider and some wild chives that could be found growing amongst the rocks. What a sturdy plant to survive such harsh conditions. I’m sure it tasted wonderful after being out in the wind and sun for the day.

Last weekend, my husband suggested that he make a stew with the Common Eider. I don’t mind letting others having a turn in the kitchen. Sometimes it is nice to eat a meal made by someone else. Everyone loved it. The children had sleepover guests that day and even they helped themselves to seconds. Children do not feign being impressed. They usually give the straight truth, either in their expressions and sometimes verbally. There is a trick when cooking the Common Eider. It needs to be boiled in a pot a water for fifteen minutes three times, pouring the water out each time and replacing with fresh water. The fat of the bird has an unpleasant flavor. After this has been done the flavor of the meat is wonderful. The recipe below is an traditional recipe used by the people living on the islands and Finnish coastline. Antti did make slight alterations with the herbs and spices he used but otherwise he followed the recipe quite closely. The original recipe in Finnish can be found here.

Common Eider Stew, to be served with boiled potatoes

The original recipe says to boil the meat in water for fifteen minutes two times, pouring out the water after the time is up and replacing with fresh water. The third time the water may remain and the meat is simmered at low heat for three hours. Skim of any foam that forms. After the meat has simmered for three hours and the foam has been removed the meat may be removed from the bones. The broth can be saved for later use. Cut the meat into chunks.
In another sauce pan, brown the meat adding herbs, vegetables and spices. The stew is ready once the vegetables have gently softened, about fifteen minutes. Add cream if desired but do not let it come quite to a boil. Remove from heat and serve with potatoes.

Now it is midsummers here in Finland and the other nordic countries. Not only is it a religious holiday to remember John the Baptist but is also a time of spending time with family. I remember one friend telling me of her childhood memories. At midsummer, her and her siblings would row across the lake as the sun was low in the horizon at their cabin. Everything had been cleaned, even the sauna which is traditionally cleaned for midsummers or Juhannus. Small birch trees brought from the forest roots and all are planted in pots and placed on both sides of the doorway. It is also a time of old tales, traditions and a few superstitions. There is an old tale that says if young girls gather seven flowers of different kinds and place them under their pillow they will see in their dreams who their spouse to come is. I suppose it might work with just as much success for boys as well if they care to try.