Yesterday was a day when flags were flown here in Finland. It was the day when Johan Ludvig Runeberg(1804-1877), a national renowned poet and writer, is remembered. He is seen as someone who helped shape and build the Finnish identity along with Elias Lönnrot who is known for his work collecting the epic poetry of the Kalevala. Often, we recognize the greatness in people after they have passed. Runeberg was an exception as Runeberg day was celebrated already during his lifetime. Runeberg wrote the words to the Finnish national anthem, Maamme or Our Land. The video below has the lyrics in both Finnish and English.

According to the legend, Runeberg had a sweet tooth and often requested his wife Fredrika to make something sweet to go with his breakfast along with punsch made from Arrack. The story tells that Fredrika would have made up the recipe for the Runeberg Tart, made with all of the things that could easily be found on hand. While the recipe for the tart has been found in her collection of recipes, it most likely is a version of the recipe created by baker Lars Astenius. 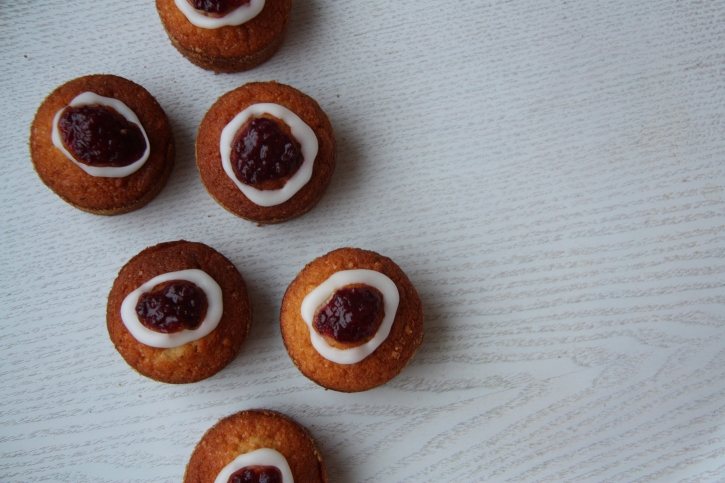 To tell you the truth, I have always had a bit of a prejudice towards the tarts as I have often found them a bit dry. My oldest daughter brought home samples from school that they had made in their cooking class. They had the perfect amount of moisture. And so I encouraged her to make a batch and so she did with just the tiniest bit of help from me. Whenever she cooks or bakes at home, she is able to write the cooking or baking project on a sheet in the back of her notebook along with a signature from a parent. This encourages the kids to try out the recipes at home, that they have first learned at school.

The following recipe is from her school book, with a few minor changes. In order to make the tarts more moist, I added to the recipe the traditional syrup that is used in most recipes. We ended up not using the syrup as we didn’t have all the ingredients on hand, but felt that for the perfect tart it needs a bit of moisture.

Cream the softened butter and sugar together until a light fluffy mixture. Add in the egg and beat well. Add in the almond extract and mix. Mix all of the dry ingredients together. Fold in the dry ingredients with the butter mixture. Mix in the cream or milk. Grease and flour a muffin tin. Traditionally the tarts have straight sides, but a regular muffin tin will work as well. Spoon the batter into a tin of twelve. Bake at 200 C/390 F for about 8-10 minutes.

Place the water and sugar into a small sauce pan and bring to a boil. Simmer until the sugar has dissolved. Remove from the heat. Add in the rum. Spoon the syrup over the baked tarts.

Mix the icing ingredients and fill a plastic bag or parchment paper icing tube. Using the icing, make small circles on all of the tarts. Place a teaspoon of jam in the middle of each tart. 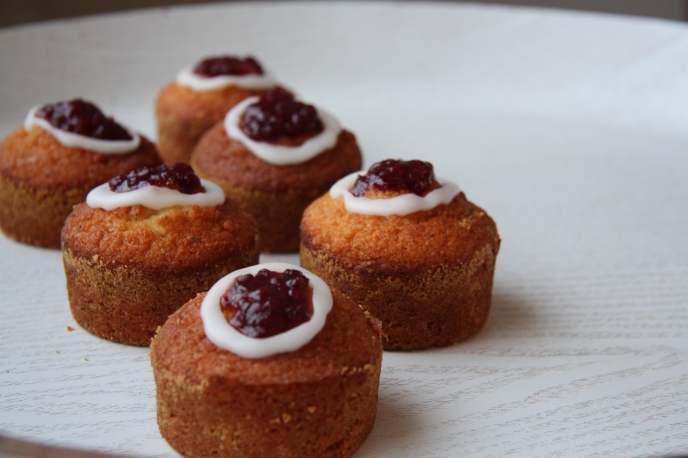