The kids are on ski break this week and the weather has been treating us great! The best days of winter have arrived. This week we have taken the kitchen outside and on Monday the whole family went on a skiing and sledding trek to a laavu, or a classic Finnish lean-to that can be found in the wilderness all over the country. They can be resting spots on a hiking or a berry picking trip and are usually open for public use. In front of the laavu, there usually is a fire pit and so we roasted sausages for lunch with the children.

The children were also hoping for a special snack, something out of the ordinary. I decided to give the vegan avocado-chocolate pudding a try. I found a recipe on the kitchn ‘s website.

It was a simple recipe and quick to make although I ended up having a little mishap in the process. As I was whipping the coconut cream for the topping, my phone rang. I left the immersion wand standing upright in the bowl and the second I turned around, the bowl fell on the floor and into two pieces and I had coconut cream all over the kitchen. Amateur mistake, I know. And I spent the next half hour with one of my daughters cleaning the kitchen. In the end, I did not have any more coconut cream left and but did have some regular heavy cream in the fridge. And so our pudding was only partly vegan. For our crowd, I doubled the recipe.

Soak the dates for an hour in warm water. Drain the dates and remove the pits and place into a blender. Peel the avocado and remove pit. Cut into big chunks and place into the blender along with the cacao, coconut milk and sea salt. Blend until a smooth consistency. I was pleasantly surprised how pudding like the consistency was. Spoon into cups. I made fairly small portions as kids sometimes have a hard time finishing large servings and I hate when food goes to waste. I prefer to start with small servings and give seconds, plus the serving does not look as overwhelming to them and they have an easier time finishing it. This is one thing I learned from my Mom!

For the coconut cream, make sure it has been chilled. Whip with a hand mixer until thick and creamy and swirl in the maple syrup. Top each pudding with a spoonful of coconut cream. Serve immediately or chill and serve later. 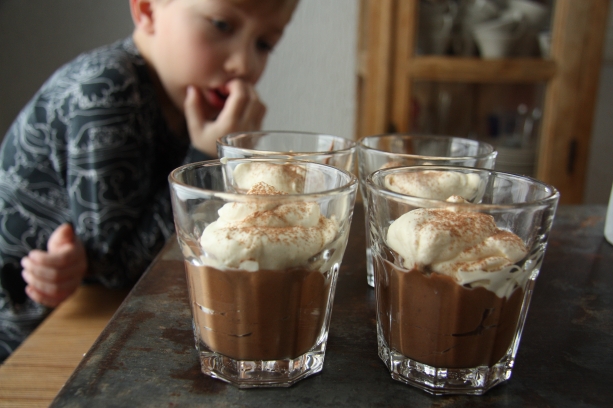 The kids had their comments. They thought it looked like something that just makes your mouth water, but they would have liked it a bit sweeter and came for another spoonful of cream after they were half way through their puddings. So perhaps next time I’ll add just a bit of sugar. 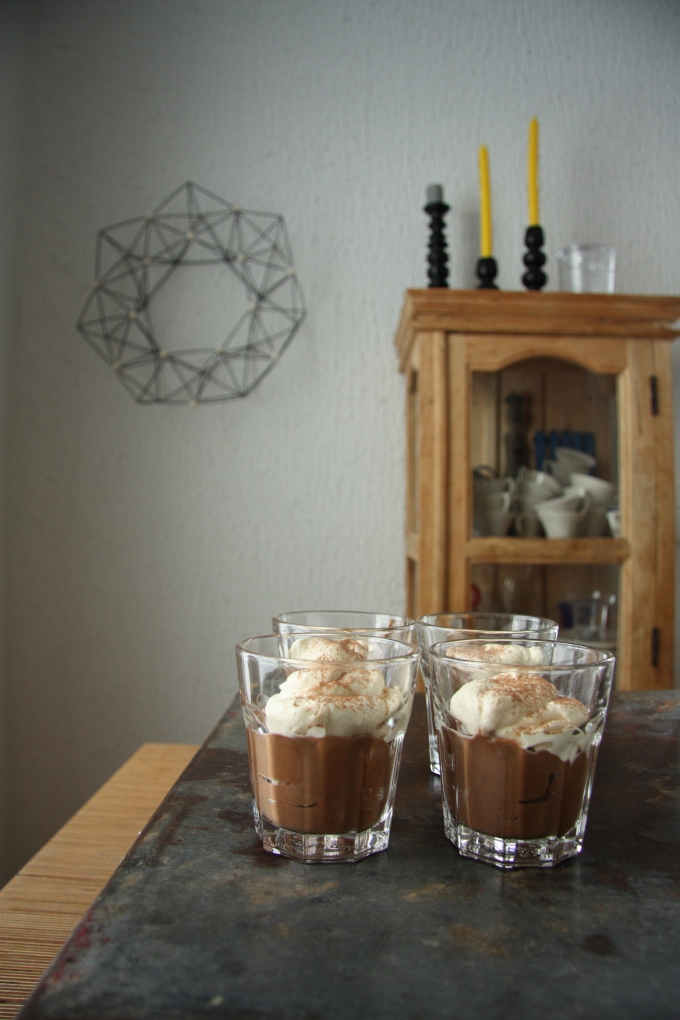 This post is a part of the In My Kitchen series now hosted by Maureen from the Orgasmic Chef. Stop by her blog to find links to kitchens all around the world!