When I was a girl, we had a brown piano in our living room. My Mom had a collection of glass birds of different sizes that resided on the piano. Some of them were from Finland and had been designed by Oiva Toikka. I remember dusting all of the nooks and crannies of the piano and the birds when it was my dusting turn. On Saturdays we would have cleaning day and everyone had a couple of jobs. Today the piano is still in the same spot but I think the birds have been put some place else and there are photographs on the piano of children who do not live at home anymore. Some years back, when I was a girl, I took piano lessons every week from Susan. I always really liked Susan and felt that she was an adult that I could really relate with. Once we had a recital and if I remember right, I think I may have played the Tarantella Spider Dance from the Michael Aaron Piano Course Book.

Some time ago, Susan mentioned on facebook that she had made homemade yoghurt. She shared her recipe with me. It was delicious. The recipe she sent had two methods, one using the slow cooker. I used my Crock pot but if you prefer, you may make it using the other method.

Since we have been getting our milk straight from the farm, the milk I used was whole milk. Because of the this, the fat rose to the top forming a slightly yellow layer that I mixed in with a whisk when the yoghurt was done. You may use milk that has a lower fat percentage if you wish. The recipe is quite large, feel free to make a smaller quantity.

Directions for the Crock pot

Place the milk into the Crock pot and set on high for two and a half hours so that it reaches 75 C/170 F. Let cool until it reaches 38-40 C/100 F. Add the vanilla to the milk. If preferred, whisk in the sugar or honey. Take a cup of hot milk aside and mix with the plain yoghurt and then add into the hot milk mixture. Wrap the Crock pot with towels and allow to rest at room temperature for eight hours (mine was overnight). Remove the towels and place the pot into the refrigerator for six hours. Whisk out any possible lumps. Enjoy with berries, muesli or perhaps a little drizzle of honey.

For the more conventional version heat the milk to 75 C/170F. Cool the milk down in a cold water bath to about 38-40 C/100-105 F. Remove a cup of warm milk and mix with the yoghurt. Add in the sugar and vanilla. Place into an oven that is warmed to 43 C/110 F. Turn the oven off, leave the light on and allow to rest for eight hours. If your oven does not heat to such a low temperature turn it on preheat for about three minutes and then turn off. After eight hours place the yoghurt into the refrigerator for six hours to chill. Whisk out an possible lumps. 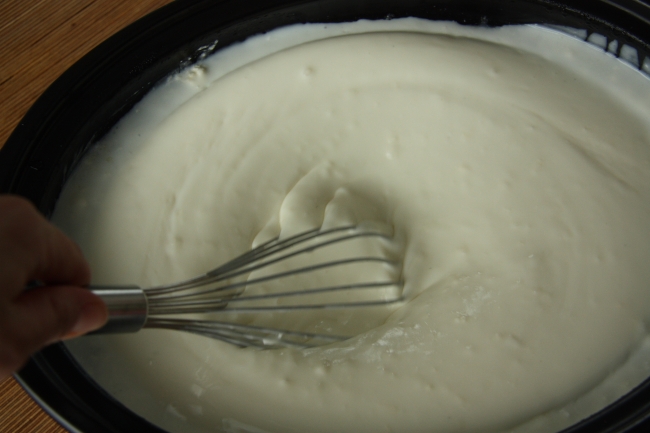 Our family goes through several liters of plain yoghurt a week and this option is rather budget friendly although it does of course require a little initiative. The flavor was quite mild. This time I added a bit of sugar. I think that this recipe may become a regular at our house.