This past Sunday was windy; so windy in fact, that when I went on a run/walk in the mid-morning I at times felt as if the wind almost prevented me from taking steps in the direction I wanted to and when I changed direction I nearly had a free ride. There was small branches littering my path as I went.

Upon arriving home, dinner preparations had been started. November is the month for moose hunting and we had fresh meat on hand. It had been butchered only a few days before. It doesn’t get much fresher than this. Usually we soak our game in a salt water brine to much success. This time we had not and so my husband had made slits along both sides of the roast before applying the rub to allow the flavors to reach deep into the roast.

The moose roast was rubbed with sea salt, black pepper and a NoMU blend that included, rosemary, thyme, marjoram, mustard, garlic, cumin and coriander seeds. After the rub was applied the roast was wrapped in foil and placed in a baking dish that was surrounded with large chunks of carrots and red onion that received a drizzle of olive oil and a sprinkle of salt and pepper. 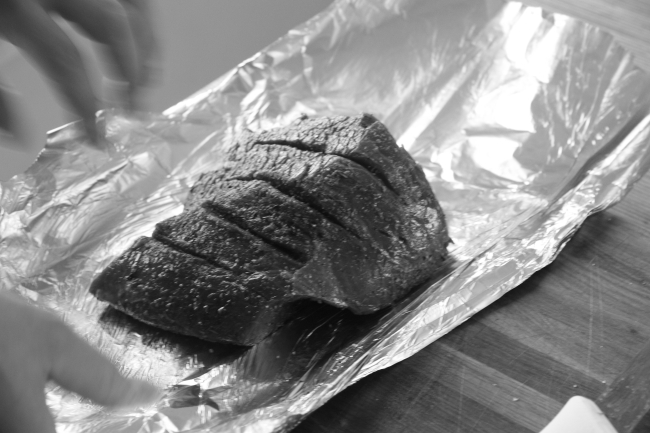 Next the meat thermometer was placed and it was baked at 120 C/250 F until the internal temperature reached 60 C/140 F. We placed the roast in the oven and even had a baking sheet full of potatoes and carrots to be soon roasted as well.

Then the power went out. About 200,000 households were without electricity that day and quite a few were still without power also the next couple of days. The meat had reached 47 C/116 F before the blackout. We didn’t open the oven and hoped that the meat would continue to bake slowly. But since the vegetables had not been placed in the oven yet and everyone was getting hungry we had to start thinking of plan B. Since we have a gas stove, we had the option to do something stovetop. I opted for making spinach crepes since it was receiving the popular vote and we have plenty of chopped spinach from our garden in our freezer waiting to be used. As I was frying the crepes the electricity came back on and so our menu for the day was decided since the moose had reached a perfect 60 degrees. We had spinach crepes with thinly sliced moose roast, roasted carrots and onions, and seasoned marscapone dollops. It was very tasty.

Mix all of the ingredients together with a whisk and allow to rest for a few minutes. Fry thin crepes on a medium hot frying pan. 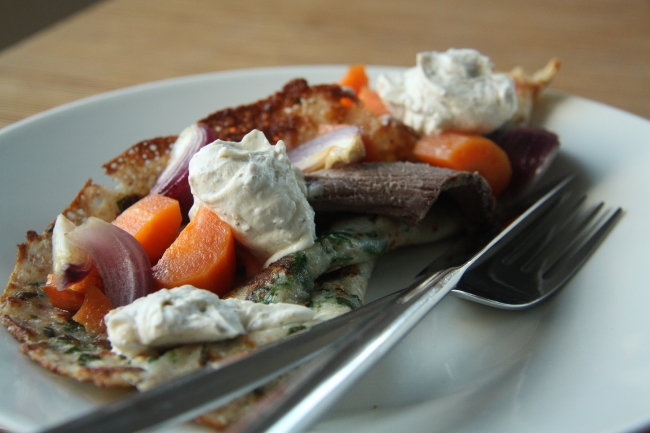